Book review: Once Upon a Genie by Durriya Kapasi 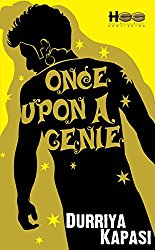 I received a review copy from the publishers in return of an honest review.

Daisy is devastated after her grandmother's death, but her grandmother has left her a note that asks her to open her treasure box to find a bottle inside.
Daisy's world turns upside down when a sexy and an intoxicatingly handsome genie named Khalil comes out of the bottle and asks her to make three wishes. Love blossoms between them even though Khalil's Djinn world condemns love affairs between humans and genies. They find it difficult to uphold their strong affection towards each other.
While on one side there is Khalil, Daisy's love interest, on the other side there is Darren, Daisy's best friend who has always loved her. So when Darren's life is in a crisis, Daisy has to make a decision that will change the trio's lives forever.

She is a chirpy young college student who falls in love with a genie. Though she knows that they can't be together, she wants to give him her all and is ready to sacrifice all her worldly happiness to be with him. She also shares a strong bond with her best friend.

He is a fun loving and sexy genie who readily gives up his powers for Daisy's happiness. Being a genie, Khalil through his deep love for Daisy shows that love has no boundary.

He is the college heartthrob and Daisy's best friend. Though Darren is a bit disappointed that Daisy chose Khalil over him, he does not show any hint of jealousy, and he is satisfied with Daisy's happiness.

The book is written with such easy words and witty narrative that it is an absolute mood lifter. It was a fun read, and I enjoyed Daisy's and Khalil's rendezvous and Darren's antics thoroughly.

'Once Upon a Genie' is a one time and an enjoyable read. What I loved about this book is it's catchy concept where a human falls in love with a genie; and a third wheel has been introduced which adds spice to the book. As we grew up reading and watching Aladin, genies have had a special place in our fantasy world; and that's why this book is such a pleasant deviation from the hardcore romantic books. Some of the parts provided comic relief and overall it was a light and good read. 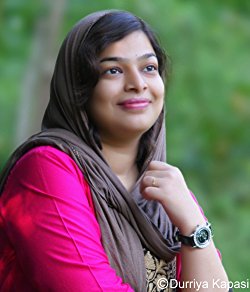 Durriya Kapasi was born and brought up in the East African country, Tanzania, while her ancestors were from Gujarat, India.
She began writing her first book with the pen name Durriya Zaheer on an online storytelling community in 2014. The first story received reasonable appraisal and received nearly million reads online. Gradually in succession, she authored two more books which received a great amount of acclamation on social media.
Durriya serves as a Creative Writing teacher at local Primary School, an editor of a reputed local Magazine and sub-editor at online news site UdaipurTimes.com. She also contributes as a Wattpad Community Ambassador.
Durriya lives in Udaipur, Rajasthan. Beside her utmost passion for English literature and reading, she loves travelling and cooking. Durriya is a Cancer Survivor (Hodgkin’s Lymphoma 3B)