Today we have husband-wife duo, authors of the Jane Larson series, Anne Rothman-Hicks and Ken Hicks between us. I would like to thank them for sparing their precious time for this interview. 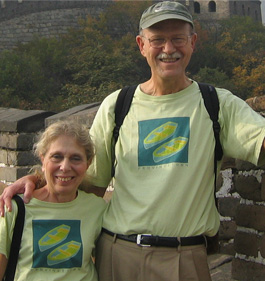 1. Firstly, I would like to congratulate you for your Jane Larson series. Could you please introduce yourself to the readers?

Thank you for your compliment and for having us on your web site.

We are a married couple who have been together for 47 years. We have lived in New York City for 45 of those years, since Ken began Law School at Columbia University. Anne worked as an editor to support us. We first started writing together on a fiction project when Anne attended Bryn Mawr College, and Ken was studying down the road at Haverford. We have published 18 books together and have two more under contract.


2. Tell us about the Jane Larson series.

The Jane Larson character evolved over time into her current form. She is a single woman lawyer living in New York City. Her mother Martha was a lawyer also, who represented the poor out of a storefront office on 92nd Street. Martha never married and would not tell Jane the identity of her father. She is a moral beacon that Jane tries to ignore sometimes, but usually cannot. In book two of the Jane Larson series, Mind Me, Milady, Martha is dead and Jane must confront the quandary of what to do with Martha’s clients.


3. You have dedicated this book to your children. How have they helped you with this book?

Our children have always been very supportive. Alice has read and copy edited our latest books as we have written them, and always has tons of intelligent advice. Our two sons have encouraged and cheered us on at every turn.


4. You have written books of other genres as well. How did thrillers come along?

We generally don’t try to write in a particular genre. We work though a plot and the themes that we want to be present in the book, and if it fits a genre, fine. If not, that’s fine also. Our books often straddle the categories and don’t belong in any single niche.


5. Is the protagonist, Jane Larson based on someone you know?

No. But it would be fair to say that she is a composite of many women we have known over the years.


6. Would you change the qualities that Jane possessed if you had the chance?

This is an interesting question. Jane faces this very issue in our next book. She sees herself as a decent person who tries to do what is right, but sometimes can come down hard on those who are arrogant, or ignorant, or who just don’t see the need for doing justice and loving mercy in this world. Also, if she had less of an edge, maybe she would meet a nice guy.


7. I am intrigued about how did you both write the book together?

Over the years of our collaboration, we have learned to hand the manuscript back and forth and back and forth again, over and over until the book is how we want it. If we don’t agree on the way a character is shown or a scene is developing, we will take a walk and discuss it. Listening is very important to our process.


8. What is your next project?

At the moment, we are working on a fourth Jane Larson book. We are also considering a fantasy/thriller for which we have a very extensive outline and much of the dialogue written.


9. Did you always wanted to write books? If so, since when?

We both wrote our first stories when we were in elementary school. Having our books published and present in the New York Public Library means a great deal to us.


10. What are your favorite genres, books and writers?

We read mainstream for the most part, although we both enjoy the science fiction writing of Kurt Vonnegut. Ken has been known to dip into Stephen King, although it keeps him awake at night.


11. Apart from writing, what activities do you both enjoy doing?

We both love to travel, and share a special interest in visiting ancient sites with Greek or Roman ruins. We also love the theater and go as often as we can. Individually, Anne enjoys yoga, Ken likes tennis. We both like to read.


12. If ever the book is adapted into a movie, which actor would do you think could pull off Jane Larson?


13. How would you link Jane's personal problems to the real life issues that people face almost everyday?

People get up and go to work and hope to do well in their careers and don’t want co-workers or events to get in the way of their goals. Jane feels that way too, but she is troubled by a world in which justice is denied to the weak and the needy. She thinks this predisposition can be traced to the fact that her mother, Martha, was a lawyer who had devoted her life to representing the poor.  Jane often jokes that Martha’s ghost haunts her. The fact is that Jane is not the sort to be intimidated. She is just a basically good person, trying to do what’s right. More people should be like that.


14. You chose New York as the place of action in this book. Is there any significance behind it?

We have lived in New York City for the last 44 years and know it very well. The city is also changing in ways that Jane does not appreciate, gentrifying old neighborhoods, forcing out the poor and lower middle class, destroying businesses.  This is often part of the story.


15. Last question, what message do you want to give to the readers?

Read books! Especially read books that have characters that you can admire and who try to live a good life. If the point has not been made, read our books!


The books in the Jane Larson series are: 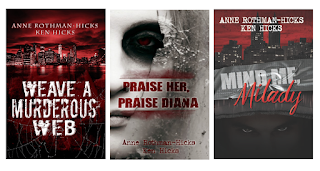 Blurb of the authors' book Weave a Murderous Web: 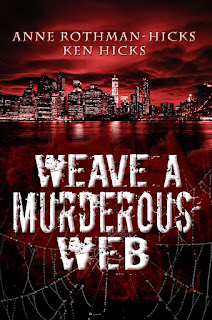 No good deed goes unpunished. When Jane Larson—a hot-shot litigator for a large firm in New York City—helps out a friend, she is sucked into the unfamiliar world of divorce and child support.

Jane's discovery of the deadbeat dads hidden assets soon unravels a web of lies, drugs, and murder that keeps getting more dangerous.


Soon, Jane is involved in a high stakes race to recover a missing suitcase of cash and catch the murderer before she becomes the next victim.

Read my full review of Weave a Murderous Web