Book review: Hell! No Saints in Paradise by A.K. Asif

"He was right; ever since I landed I came to realize thinking was a pretty useless activity. If anything, mulling over each and everything that crossed my mind had only made matters worse and done nothing to alleviate my confusion and uncertainty." 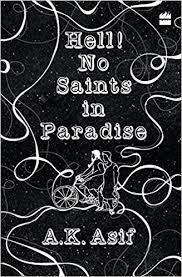 Ismael has been brought up by a very conservative and faith following father whose life's goal was to instill a strong seed of Muslim faith in Ismael. Ismael is the only son of Hajji Ibrahim, a father who brought up his son by telling him the stories about paradise and hell as given in the holy Quran. Ismael runs away from his home in Lahore at the age of eighteen when he sees that his father can go on to any extent in order to protect his faith. He runs away to America and there, in order to prove his father wrong, he starts working on his dissertation that proves the absence of heaven and hell and that they are just a fragment of our imagination.

On an October night, in the year 2050, Ismael meets a psychologist named Petra at a bar who introduces him to Alahuasca, a psychedelic drug used for healing purposes and which can take a person to the spirit world. Ismael then decides to go for the therapy and it is then that he dreams of a strange old man on a bicycle named Chacha Khidr. Chacha Khidr tells Ismael in a cryptic fashion that he has been bestowed upon with a duty to save the world.

Pakistan has been converted to the Caliphate of Al-Bakistan and many more regions are being forcefully joined to this former land of Pakistan by the Khalifa. Anyone who is being suspected of being a 'kafir' or 'Islam unbeliever' are being executed. Ismael has been employed by Chacha Khidr and Pir Pul Siraat to go back to Lahore and restore peace in the disturbed land. Thus begins Ismael's strange and crazy adventure to infiltrate the Khalifa's most trusted group of men and save the world.

Ismael is a hardcore nonbeliever. He has his internal conflicts with his father regarding their distinctive differences about religion. Ismael states in the book that he grew up listening to the lores of Munkar and Nakir- the two cruel angels of Islamic hell, from his father. According to Ismael, his father wanted to implant fear in young Ismael so that his desire for Paradise increased. This only led to distances between the father and son.

Along with Ismael's childhood trauma and separation from father, the book portrays Ismael as an 30-yrs-old who has a hard time controlling his lust for women. In many hilarious situations, Ismael gives in to his inner desires. But, Ismael is an honest and good hearted young man who wants to do good for people.

This is A.K. Asif's first novel. As a debut author, A.K. Asif's writing style is very matured. The prose in the book is smooth. It is understandable, clear and fluid. The novel has a certain words that would enrich your vocabulary, but they are brilliantly incorporated in the right places. Another thing that I liked is the way the author presents his scenes. His descriptions of various situations will help you sketch the scenes inside your head. I would definitely like to read more of A.K. Asif's works. 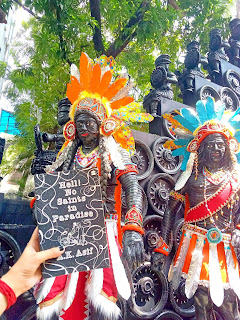 The blurb of the book says that the book is a 'biting satire and allegory'. I am not much of a satire reader, but this book did not disappoint me. In fact, this book is a learning experience for me. I did not know much about Islam, but this book has some riotous take of some of the Muslim laws which amended my knowledge in an easier way. Psychologically speaking, the book also depicts how a father's strictness can tamper his and his son's relationship. 'Hell! No Saints in Paradise' gives you a slice of horrifying insight about how blind greed for a place in Paradise in the afterlife can make this world a gruelling place to live in. This is one book I will recommend to all.

Brought up in Lahore, Pakistan, A.K. Asif has been living in the United States since the age of twenty. He is currently working on his next novel.

I received a copy from Writersmelon in exchange for an honest and unbiased review.