Book review: The Tree with a Thousand Apples by Sanchit Gupta

"... And she had promised herself, when everyone is vying to kill and be killed, God needs someone who can cure, who values life when it is being sold for a few rupees. And if nothing else, compassion would be her only purpose of life. Revenge is an orphan in bad company, she had learnt; until it accepts the truth, it may never find grace."

The story revolves around three Kashmiri childhood friends Safeena Malik, Deewan Bhat and Bilal Ahanagar, whose intertwined lives have been jeopardised in times of crisis. Deewan is a Kashmiri pandit who grew up embracing Kashmir as his home. Deewan, Bilal and Safeena grew up together as dearest friends but when insurgency strikes the paradise called Kashmir, Deewan and his family are forced to flee their homeland, thus separating the three friends.

Bilal lives in poverty and when an unfathomable tragedy hits his home, he becomes a heartless young man he thought he could never become. Safeena becomes a nurse to help people survive in these difficult times but when slowly everyone leaves her, she becomes a fighter she thought she could never become. Kashmir is no longer their peaceful abode. Families are being torn apart, poverty and sickness is ubiquitous. The army men are killing anyone they suspect to be militants and the civilians are protesting on the streets through violence.

There are beautifully moulded characters in this book. Deewan, Bilal and Safeena's friendship is so pure and pious that my heart ached every time they got separated from each other.

Deewan is the eldest amongst the three of them. He is the big brother of the group. If anyone faces any trouble he is the one who sorts it out. He is the one who helps to calm down Safeena's nerve when she is about to go on stage, and he is the one who fights the bully who tries to trouble Bilal. There's a maturity Deewan's character shows at the age of 12.

Safeena's character is a tranquil one. She is a believer of justice and truth. Her character, both in her childhood and adulthood, shows innocence which is the pure at heart and mind. She can do anything for her family and so can Bilal.

Bilal is the fiercest amongst the three. Bilal as a child is a mischievous yet a bright boy. He is good with machines and their mechanisms. Bilal grew up hating the government and when finally the dam breaks, he does not hesitate in joining the rebels.

Author Sanchit Gupta's writing style can be defined in one word as 'beautiful'. He paints the book. The vivid description of a picturesque Kashmir and the pathos surrounding it made my head dizzy. How he illustrates the pain in his book is beyond my ability to think. His words will keep you glued to the book and some of the local words used in the book are aesthetic for the mind and soul. Even the poems written in the book are pleasing. 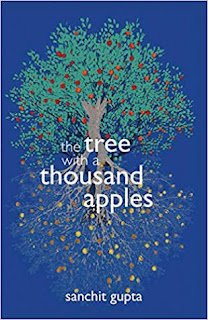 This is one of those books that will not let you release your breath until and unless you have finished reading the entire sentence. I read this book in a trance. I did not want anyone to disturb me and I did not want to stop. This book kept me awake and when I finished reading it late at night, I closed my eyes and sat there unmoving.

The books shows you the other side of Kashmir. The one from the Kashmiri's perspective. Now that I have read the book I don't know who to believe anymore- the army, the government or the residents. This book is definitely an eye-opener for me. This book has so many emotions in it, and you should read this to let these emotions hit you hard, real hard. 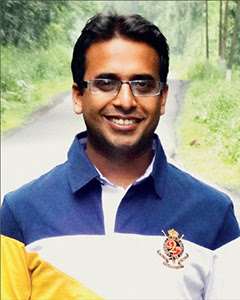 Born and brought up in the hills of Himachal Pradesh, Sanchit Gupta began his career as a part-time copywriter with an advertising agency in Mumbai. He went on to co-found his own theatre group, worked as a freelance film screenwriter and as executive producer–fiction for a leading television network. His short stories have been published in several esteemed publications and literary journals and have won acclaim in leading literary festivals and online forums. One of his film scripts (fiction) has been long-listed in a globally reputed screenwriters’ lab. He has worked with All India Radio as a talk show host and regularly features in poetry recitals at Prithvi Café, Mumbai. This is his debut novel.

Apart from being a writer, he is a brand management professional with a wide range of brand building and communication development experience across FMCG, automobile and media industries. His works explore his fascination for global cultures, societal structures, vagaries of the world and the human mind. He welcomes interaction @sanchit421. Find out more about the author and his work at www.sanchitgupta.in

Buy the book from Amazon.in here

I received a review copy of this book in exchange of an honest and unbiased book review.