"I Iove you too with as much insanity and sanity as you do." 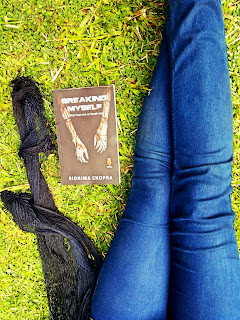 Alina Gupta is a seventeen years old girl who is pursuing the Science stream under parental pressure. Her interest lies in literature, yet she is preparing for Medicine just because of her parents' wishes. She is a broken teenager with a dark past who hides her pain because no one in her family understands her. She finds solace in reading novels but she is even barred from reading them since her parents think that reading anything other than course books is a waste of time.

Alina's life takes a turn when she meets her best friend Nisha's twin brother Kabir for the first time at a party. It is only Kabir who sees the pain hidden behind Alina's eyes and when he tries to confront Alina about her secrets, Alina runs away from Kabir. But this does not stop Kabir from decoding Alina. Soon, Kabir and Alina forms an unbreakable bond of friendship between them. Kabir is polar opposite of Alina, but Kabir does not let go off Alina's pain and helps her fight her internal demons.

Though Alina's parents don't approve their friendship, Alina does not let it ruin her growing feelings for Kabir. As more and more secrets come out of the closet, will Kabir be by Alina's side always? What are the dark secrets behind Alina's nightmares? How will Kabir and Alina deal their feelings for each other? Read this book to find out more.

Given the fact that the author, Ridhima Chopra, is just seventeen years old, the book is well written. Though there were quite a number of grammatical errors, the story had a good flow. The book has been written in a simplistic manner and it has an easy language. There are a few extra details given by the author which has no relevance to the plot. Sample this: "Dustbin was made of metal with circular holes. Napkins burned with a red-orange flame and with them my secrets also burned." The dustbin's shape had no relevance to the story yet the author describes it and I have no idea why. 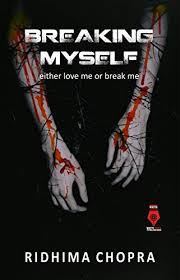 I really have to give credits to the young author for showcasing such a huge issue in India through her book. The author's portrayal of the agony every teenager in this country goes through is applaudable. Alina and her struggles are so relatable in today's world. The book actually tells you openly about the agonies a teenager goes through under parental pressure. The book also covers issues like rape and the prejudices surrounding it.

Apart from that, the characters of the story are also well formed. Alina is a quiet and reserved girl, while Kabir is a playful and adventurous boy. How these two characters slowly and eventually fall for each other is something to look out for in the book. I really liked the love-hate relationship Alina and Kabir has between them.

Breaking Myself is not a regular love story. It has a lot of suspense elements in it. Though I feel that the book is a bit stretched and I lost interest midway, the story picks up the pace in the last few chapters. The bickering between Alina and Kabir went for a long period and I just wanted it to finish soon. Nevertheless, it was a good read and kudos to the author. 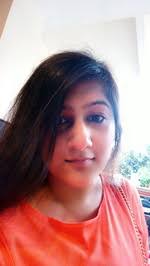 Ridhima Chopra is a seventeen years old crazy teenager, born and raised in Ludhiana, Punjab. She started writing after realizing that words have a power to change the world. Most of her time is spent on wattpad - writing novels and reading. She is an avid reader and reads anything that comes in her direction.


I received a copy of the book from the publishers in exchange of an honest and unbiased review.