Blog Tour & Review | Journey Across The Street by Madhusudhan R.

Journey Across The Street-Madhusudhan R. 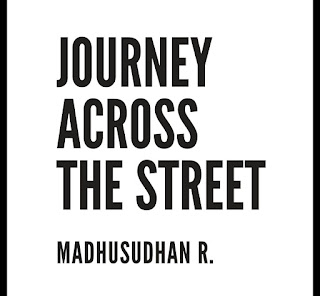 "When you travel, you don't fear the unknown. You become a part of it.


You don't meet a million people. You meet yourself, in million forms." She had once said.


I had fallen for a gypsy heart.


We were complete opposites. She was a secret traveller, I was a dreamer.


Though we lived across the street, we spoke to each other after 14 long years of awkward silence. Everything had changed. She was a well kept secret. Everything about her was a missing piece of beautiful puzzle she had turned into. But the Universe had other things to offer before I could bring all the pieces together. After all that only one question remained, WHERE IS RHEA?

Journey Across The Street

"She had brought a storm of love into my life and my heart was too weak to handle it all at once. With her, I felt like I could stretch my hands, jump off a cliff with my eyes closed; I wouldn’t fall but glide over the cold clouds."

When I started reading this book I thought I would be going through some old school romantic story but as the story progressed it suddenly took a turn and it became a thriller. I must say that the plot twist by the author is extremely well defined and gives the reader no clue about the change of genre. It was a slow start but as the story progressed the suspense in the book built up and it became a fast read.

Goutham and Rhea are polar opposites and both of them have very unique characteristics. Like, Goutham is extremely focused and sorted out about his life and is a no nonsense guy; on the other hand Rhea is absorbed in her own problems and to sort out her problems she seeks solace in travelling and being wild and free. When these people come together they complete each other. The way Goutham falls for Rhea bit by bit, the way he acknowledges his feels and regards her presence in life gave me a queasy.

Apart from a few typos the narration of the author is descriptive and well written. The author's characters have depth in them, and some strong and distinct opinions that puts them apart. Here I would like to point out that some of the opinions or characteristics of the protagonists were not justifiable enough. Like, Goutham, our male protagonist has some strong stereotypical feelings regarding girls in general. I could not figure out why.

Journey Across The Street is a romance novel with a suspenseful twist and I thoroughly enjoyed it.

Madhusudhan wrote his first novel on love when he was 21, because he realised writing about love is easier than actually finding it. His hobbies have changed from time to time but watching people behave remained his fav.
He has written short film, ad films and along the side has also completed his bachelor's degree in Aeronautical engineering. He is currently working as a design engineer in a well known Aerospace firm. If he is not writing, you can find him watching  Sitcoms, or wondering if penguins have knees.
Author Page
Book's Facebook Page