"'Why would someone cheat a simple woman like me?' She had the answer now - 'Greed'." 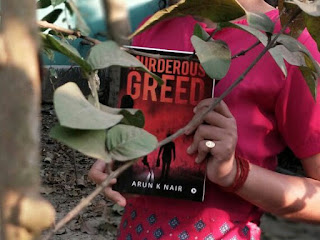 Blurb of the book (as taken from Amazon.in):

Early one morning in the township of Avadi, a woman who was on her way to attend a relative's wedding falls victim to a chain-snatcher and loses her life in the process. The very same morning, Karthik, an up and coming young businessman is found shot dead in his car in the middle of the road - the only witness to the incident being his employee Drishti who was in the car with him at the time. The responsibility of getting behind the root of both incidents falls on Inspector Satyajit, an intrepid and honest police officer, and his team who get cracking on both cases immediately. But as the investigation proceeds further, the incidents and the stories of those involved get increasingly confused and murkier. What illegal deals was Karthik involved in? Did these deals cause his untimely death? How is all this connected to the housewife who was killed the same morning? What is the part played by the mysterious Gun Club in all these events? Follow Satyajit as he attempts to uncover these dubious questions.

Murderous Greed is one of those books that will keep you up late at night. What starts out as simple accidents, turns out to be well-planned, deceptively thought out murders. This is a book with twists and turns and heart-racing confessions. This is a book about greed and the consequences it can lead to. Let me start with the characters first.

The main characters of this book are Satyajit and Drishti. Satyajit is the Police Inspector who is responsible for solving both the cases while Drishti is the prime suspect for murdering Karthik as she was the only one present while Karthik was murdered. Though Drishti does not have many appearances in the story, her character makes a tremendous impact on the readers as she has her own sad story. Satyajit being the main male protagonist, his character develops as the story progresses. The readers will get glimpses of the ways his rational judgements regarding the cases take place in his mind. Also, I really liked Satyajit's character as a whole as he is one of those hardworking, fearless and obedient policemen whose main concern is attaining justice.

Now coming to the plot, it becomes addictive towards the end as the revelations finally comes out. The book is a fast paced one from its first page and I actually finished it within 24 hours. The best think that I like about the book is that the story in not complicated and doesn't deviate from the plot. It is well worked out and it is clearly evident that the author has done a lot of research work on this book. From intricate details about bike stunts and government tenders, this book has it all.

As I already mentioned before, Murderous Greed is a well researched, well laid out book. Though I feel that the suspense kind of lacked towards the beginning, it gradually built up towards the end. Author Arun K. Nair's sentences are short, simple and crisp. I wanted more details about Satyajit, like his back story and how he rose to the position of being a Police Inspector, but nevertheless I was not really disappointed. Also, the dialogues between the characters seemed too informal. This can affect the readers according to their preferences. As I don't really like informal interactions, the book's dialogues did not work out well for me. But then again, it does not really affect the book's quality.

So if you want a good murder mystery that you can finish in one or two sittings then this is your go to book.

Arun K has lived most of his life in Chennai. He is a movie buff, avid traveler, and reader. He likes to read crime novels and management books. He has worked on scripts for short films before deciding to author a crime novel.

Murderous Greed brings out the dark side of humanity. The underlying theme of the story is greed and how it goes beyond the realm of human values and friendship.