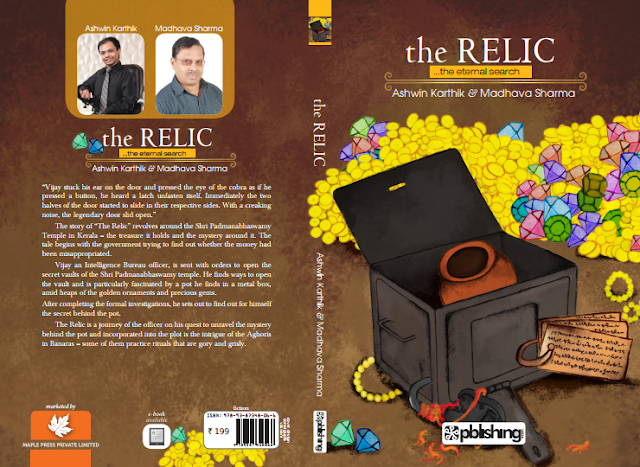 “Vijay stuck his ear on the door and pressed the eye of the cobra as if he pressed a button, he heard a latch unfasten itself. Immediately the two halves of the door started to slide in their respective sides. With a creaking noise, the legendary door slid open.”
The story of “The Relic” revolves around the Sri Padmanabhaswamy Temple in Kerala – the treasure it holds and the mystery around it. The tale begins with the government trying to find out whether the money had been misappropriated.
Vijay, an Intelligence Bureau officer, is sent with orders to open the  secret vaults of the Shri Padmanabhaswamy temple. He finds ways to open the vault and is particularly fascinated by a pot he finds in a metal box, amid heaps of the golden ornaments and precious gems.
After completing the formal investigations, he sets out to find out for himself the secret behind the pot.
The Relic is a journey of the officer on his quest to unravel the mystery behind the pot and incorporated into the plot is the intrigue of the Aghoris in Banaras – some of them practice rituals that are gory and grisly.
It talks of ascetics and their divine yogic powers, through which they could teleport their souls into other people’s bodies. It also talks about astrology and also warns how people in the modern world are being misled by the fake astrologers.
The story is both a thriller and an insightful glimpse into the  protagonist’s mind, that incorporates Vijay’s personal life and his curious past.

Ashwin Karthik S.N:
Ashwin established himself as a true achiever from the very moment of his birth. He was born with a deficient supply of oxygen, which resulted in a crippling and life-long condition called cerebral palsy.
He is quadriplegic, with the severest form of cerebral palsy that affects all four limbs. But, as though to balance his misfortune, he is blessed with an indomitable spirit and the will to take up impossible challenges of leading and succeeding in a world full of people without disadvantages;
Qualified as the first engineering graduate in India as Computer Science, as specialization. Ashwin is presently working with ANZ, as a Business Analyst. Besides the precision and efficiency he shows in his work, he has also been a mascot of the company’s effort for inclusiveness.
Ashwin has been felicitated with many other awards, the highest among them being the national award for being the “Best Employee” in the space of PWD’s from the honourable president of India Shri Pranab Mukherjee and the Helen keller award.
Work and academics are not the only fields he shines in! An embodiment of a truly multifaceted human being, he gives form to his feelings and beliefs through poignant poetry written in different languages.
Madhava Sharma:
It is said that god doesn’t give you troubles without giving you the strength to face them. It takes a lot of zeal and determination to convert one’s weaknesses to strength. Madhav is a living example of the above. The man descended slowly in blindness due to the medical condition called “Macular Degeneration”.
The medical condition was only potent enough to snatch away the man’s sight but not his vision or his love towards life or the dignity with which he chose to lead it. After successfully qualifying as a commerce graduate, Madhava has walked various paths of life in order to respectfully earn a livelihood.
He has worked in various organizations at various positions, he has successfully worked as an insurance agent and has a LIC agent profile for over two decades. He has also been a successful business man for some time.
Currently he holds the position of a senior officer in the admin department of a MNC called Mphasis.
Madhava is an inspiring personality, he believes in returning what he has received from the society and hence is serving at various social organizations and NGO’s that work towards the betterment of the specially abled.
His poetry in kannada not only entertains and inspires one and all. But also conveys a very strong and positive message to the society.