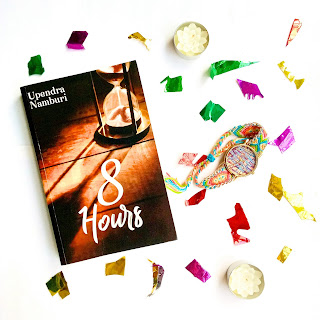 Blurb (as given in Amazon.in):

Aratrika Reddy, the charismatic CEO of ARYA Holdings Ltd., has just 8 Hours to save her company from certain bankruptcy.

The multi-billion dollar hotels to steel conglomerate, founded by her mercurial father, liquor baron Madhusudhan Reddy, has many suitors, all of them plotting a hostile takeover. Aratrika’s estranged husband, Siddhartha is one of them. His inside knowledge is the real ace up his sleeve. The Rathores, the Reddys’ arch-rivals are looking to buy ARYA too and thereby settle old scores.

Aratrika has to weave her way through a litany of lawyers, politicians, bankers, bureaucrats, investors, power brokers and her dreaded family. Behind the scenes, Jagannath Rao, her wily uncle, is playing a dangerous double game of manipulation. Her father Madhusudan is furiously pulling the strings from behind the scenes. To add to the confusion, overseeing the whole sale process is her old flame, Peter.

Over the course of a single night, 8 Hours to be precise, Aratrika must fight the demons at the gates of her company and those within. It’s a fight to the bitter end.

A fight that Aratrika does not want to lose… 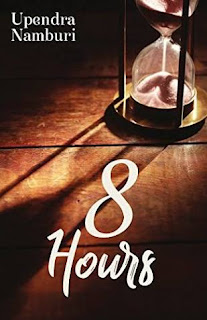 Aratrika Reddy's business empire ARYA is about to crash and she has just 8 hours to get her empire back on its feet. ARYA has to face a certain bankruptcy if Aratrika does not act accordingly. To make matters worse, their are 3 other competitors are planning to take her down.

Aratrika Reddy's character is that of a strong and wise leader. She rose from the ashes left behind by her father's cruelty on herself, her mother and her brothers. She loathes her father for her broken family, the abuses he hurled upon his own family, and the corrupted way in which her father has built the firm. She wants to become everything that her father could not become, yet she realises that in the process of her journey towards her goals, she becomes like her father.

A broken family and a con man for a husband, Aratrika Reddy takes it all in her hand to save her business empire. She needs to save her firm and employees from bankruptcy and tackle the competitors at the same time.

Apart from Aratrika, there are other characters that make this book. They are the capable suitors of ARYA, some of them who want to buy ARYA itself, and some of them who want to bring Aratrika's father, Madhusudhan Reddy to his knees. Then there is Aratrika's husband Siddhartha, who also hatches a plan to make sure that ARYA becomes his. There is Jagannath, a cousin and advisor to Madhusudhan Reddy, who is playing his own game to bring ARYA down.

8 Hours by Upendra Namburi is a suspense with a lot of business related issues. Actually, the whole novel revolves around commerce related topics, that I am not well versed with. For someone like me, who is not aware of economic terms, it was rather difficult to grasp the concepts of the story. But it clears out at the end when everything comes in place and the final showdown happens.

The book struggles to put a clear picture of story in the first half of the book. I was actually struggling with it to understand what exactly was happening there. There are a lot of 'seemingly intelligent' conversations and phone calls in the book which rather baffled me I would say. But overall, this book provides for an interesting read with a climax that the reader should watch out for.

The book portrays a realistic view of the business world. The deal that takes place within 8 hours, that too from 1 AM in the night to 9 AM in the morning, keeps every character awake and up on their shoes. The book also gives a reality check of the underworld and how everything works with the help of money and bribery. The portrayal of a strong female as the lead is something that I loved in the book. 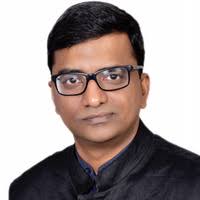 A digital & marketing professional by day, an engineer & MBA by accident. Upendra is married and has a son. Upendra was first bitten by the writing bug when he was invited to write for one of India’s leading finance dailies. It soon turned into a love affair that turned him into an avid blogger and finally made him take the plunge into the unchartered waters of the Novel. Upendra now takes complex subjects like banking, consumer goods, mergers and acquisitions and turns them into nail-biting thrillers, making those dull and dreary numbers come alive. But he really hasn’t shifted his focus as such, for he still thinks of his books as numbers: 31, 60 and 8. 8 Hours is the third book in the Numbers series.


I received a copy of the book from Writersmelon in exchange of an honest and unbiased review.