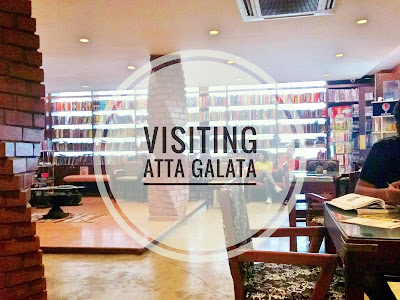 On 23rd September (Monday) me and my boyfriend went to Atta Galata. It's a very sweet and cozy cafe where you can sit for hours and have snacks and read books or write assignments or work on your laptops.

This Cafe-cum-Bookstore is in Koramangala, Bangalore. Most Bangaloreans know that Koramangala is a hub for young (mostly college-goers) people to hang out with their friends. So while my boyfriend was surfing for a proper place to have a light lunch, he came across this cafe. Since, both of us are new in Bangalore, so we heavily rely on Google Maps to give us recommendations. He suggested me this place and I happily agreed. By the way, he is not at all fond of reading and was ready to go with me only because I went to a dog cafe with him a couple of days ago. It was a good deal for both of us, tbh. 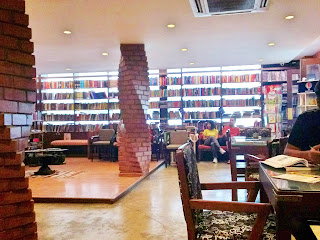 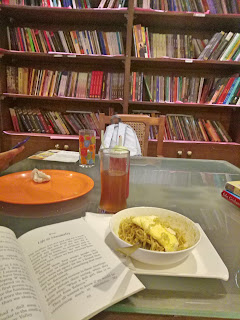 So, relying on Google Maps Mata, we walked almost 1 km (again, because I always insist on walking) and reached the location only to find that there was no cafe named Atta Galata. But the my boyfriend pointed out towards a small board bearing the name 'Atta Galata' with a pointer towards the 1st floor of another cafe. I looked up from the road and saw a floor-to-wall window displaying racks and racks of books!

After entering it, I saw people huddled around small squared tables, either reading, writing or typing. We were a little confused whether it was a cafe or not because we noticed that none of the people were eating. But then we got a table to ourselves and the first thing I did was (yeah, you guessed it) go to reading section and pick up a book to read. I took 2 books, one was an abridged version of Rebecca by Daphne de Mure, the second one was John Grisham's Calico Joe and the third one's name I forgot. 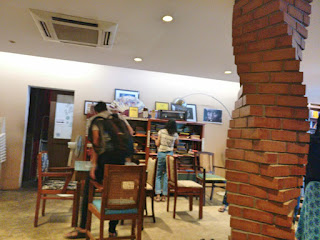 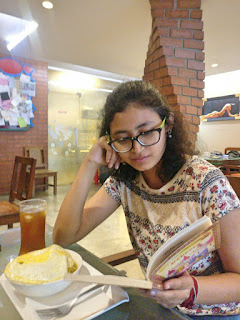 I started reading Rebecca because we didn't have much time in our hands and ordered a bowl of egg masala Maggi and a glass of iced tea. My boyfriend ordered sandwiches and some drink (I forgot what juice was that). While I was reading, he played kept silent and played PUBG on his phone. He is pretty supportive when it comes to me reading a book or writing my posts. I read the whole book and ordered another bowl and it was super cheap and tasty I tell you. It was nothing fancy, yet it was lip-smacking good. We were there for almost a couple of hours and no freaking one asked us to leave. In fact, we noticed that there were people who came before us and were still there doing their own work. It was fascinating to see strangers sharing the same table and working on their own. 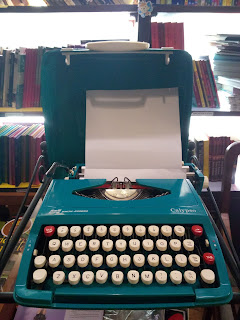 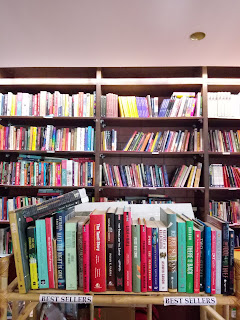 When we went to pay the bill, I discovered that the racks of books I saw from outside were actually a part of the Bookstore. And that section of the cafe had such vintage vibes with vintage sofa sets and fancy typewriters. It was a really lovely day and the weather was awesome and I had a great time (I don't know about my boyfriend) and I'm looking forward to visiting it again and reading in peace and eating a bowl of egg masala Maggi. :)
Labels: Atta Galata Bangalore diaries Bookstore visits Diary entry Miscellaneous article