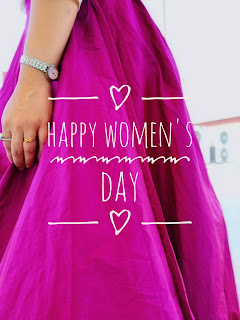 While walking the six minutes distance from my rented flat to the bus stop almost twenty people stared hard at me and at least a thirty odd people who were standing at the bus stop waiting for their daily commutes examined me, scrutinized my attire from my head to my toes. Well, you see, I have this Women's Day programme at college and the boys in our class told yesterday that we could wear anything we want and there's no such dress code. I had decided on a simple blue high-waist jeans that I normally wear to college and a navy blue shirt tucked into its band. But one of my closest friend suggested the two of our other friends and me that we should wear something gorgeous for fun. So I kind of ended up wearing a long sleeveless black and white striped gown. It was just the standing-out-from-the-crowd kind of a dress early in the morning. I know why they were staring at me. It's just because I was the only person wearing something odd. But did that affect me? Just a little bit. It was not shame or guilt. It was embarrassment. The thing you feel when you are standing in a room and all pairs of eyes are on you because you wore a superhero costume to a party where the theme asked you to wear pajamas.

And why am I exactly writing this? Umm? Maybe because I want you to realize that it doesn't matter how hard people stare at you. All that matters is what you want to be. Haven't we all been dictated by others about what we should wear and shouldn't, where we should go and shouldn't, whether we should hit the gym or shouldn't, heck, even what we should eat or shouldn't. I'm not saying to have a fuck-the-world attitude and not listen to anyone. Just don't feel guilty or embarrassed about something that you really really want. Even if someone stares hard at you you shouldn't put off the desire within you. After all, why dampen your high spirits with other people's weird stares? The world is judgemental enough. We don't need stares to affect our well-being now. I wish I had just held my head high and shoulders straight today morning. And not shy away and examine my shoes instead. I wish I had looked straight into the eyes of that aunty who even turned her head to have a proper look at me and raised my left eyebrow as if to say 'and so?'
Labels: Diary entry Miscellaneous article Women's Day