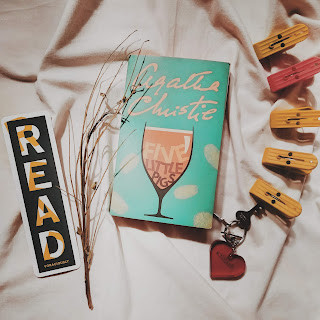 This was my fourth Agatha Christie novel and my first Hercule Poirot one. And can I say I was bowled over, again, by the Queen of mystery?

Five Little Pigs is about a murder case being uncovered after a 16 or so years by the victim's daughter. The convicted was the victim's wife and the daughter, after reading a letter from her mother just few days before her death which claims that the mother is innocent, wants Poirot to find out who the real murderer was.

Out of 5 suspects, Poirot has to unveil who killed Amylas Crale and why? Was it Amylas' best friend and his brother, or the governess, or his mistress for whom Amylas had threatened to leave his wife. Poirot digs up the past, refers to the prosecution and defense opinions in the court case, questions each suspect, to prove Amylas' wife innocent.

I loved the maze Christie has created. The jarring way in which Poirot solves the case, the twists and turns, the deflections, and differences in opinions about Amylas' wife, the accusations, and the tactful murder, it's surprising - how Christie does it every single time.

PS, this was my 3rd book for Femme March Fest.