Mini Book Review | The Tattooist of Auschwitz by Heather Morris 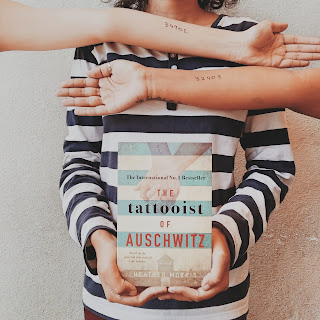 I was sucked into Lale and Gita's world as soon as I had started reading it. Based on Lale Sokolov's love story that started in the huge concentration camp of Auschwitz, this book is a heart-jerking journey.

The book starts with Lale's journey from his home to Auschwitz, how they travelled like herds of cattle, then his daily routine as a labourer in the camp. Slowly Lale rises to the position of being a tattooist. He tattooed numbers on the arms of each and every new prisoner in the camp, thus removing the identity of the prisoners altogether. Lale never wanted to be a part of this torture. But the few extra amenities he received as a tattooist, he used them to help his fellow prisoners.

In a chance happening, Lale meets Gita, another prisoner going by the number 34902, a number Lale had given her only a month ago. For Lale, the only flower in the desert was Gita. And he did everything possible within his reach to make sure she survived till the end.

I read the book in one go. One single sitting. Because I was so afraid of letting go off their story. Such is the story-telling.

The Tattooist of Auschwitz is a thought rendering book about two people in love, trying to survive each day in hopes of being with each other after the war. Their hope crushed me because their hope was against the whole system of the concentration camp. Where people have given up hope of seeing the next day, Lale and Gita had dared to hope. Their love and care for each other and their friends' wellbeing has added to the dark essence of the book.

Although I'll remember the book forever, it has failed to impress me in the way I had expected it to do. Maybe because, the whole limelight being on Lale and Gita's love story, it failed to bring out the much more heinous side of concentration camps. So if you think it might be an educational book about the Nazi reign then this book might not be for you.