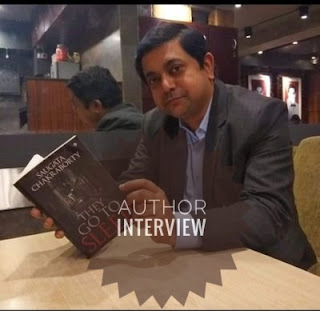 I got to interview Saugata Chakraborty, author of They Go To Sleep. Here is my conversation with the author.

1.   Hearty congratulations to you on your recent book 'They Go To Sleep.' Could you tell our readers about the book?

Thanks a lot.
‘They Go to Sleep’ has a dozen short stories between the covers. From the reaction of the readers so far, the stories have been able to attract their attention. It may sound like a cliché, but you will find at least some of these stories to be different from the regular run-of-the-mill affair.

2.    They Go To Sleep has stories from different genres. Any specific Genre that you love working on and why?

Not really, if the story idea appeals to me, then I don’t look at the genre. It has always been the other way round. I find that a particular story fits into a genre after finishing it. However, a majority of critics have suggested the same that I should try writing a thriller next.

3.    Are the protagonists or any other characters in the stories based on real-life people?

The narrator in ‘They Go to Sleep’, ‘It was Time’ and ‘What’s In a Name’ is me. It may sound strange but except for the climax of the last two stories, all other incidents are real. I am lucky to have lived such a strange life (laughs). Barring ‘A Man of Letters’, the science-fiction, all other stories are based on real-life events and hence the characters are all real people of flesh and blood.

4.    Which are your favorites from the book?

The first and the last story from the book i.e. ‘They Go to Sleep’ and ‘What’s in a Name’ and the ten other stories in between. Jokes apart, those two along with ‘It was Time’ which is the oldest in the collection remain to be my personal favourite.

5.    Who are your favourite authors?

I will start with the authors in Bengali. Rabindranath Tagore as much for his poems as for the short stories. Bibhuibhushan Bandyopadhyay for his universal appeal, Syed Mujtaba Ali for his pure wit, Sharadindu Bandyopadhyay for Byomkesh Bakshi and so many unforgettable film scripts, Sukumar Ray for his nonsense rhymes, Satyajit Ray for Feluda and his other short stories, Sanjib Chattopadhyay for humour and spirituality. Among the Indian authors in English, R.K. Narayan, Ruskin Bond and Amitav Ghosh top the list. Apart from the one book favourites, Charles Dickens, Mark Twain, George Orwell, O’Henry, Ernest Hemingway, Jules Verne, Isaac Asimov, Arthur Conan Doyle, Roald Dahl, Frederick Forsyth, and Jeffrey Archer have all been an inspiration.

6.    Out of all your stories in the book which stories do you want your readers to pay extra attention to?

‘The Man who Sold his Gods’ which is based on the idol trafficking network spun by Subhash Kapoor has a rather large ensemble of characters, each of them holding a key to the whole plot. To top that, the story is not written in chronological order. Without paying attention, it would not make any sense. However, if you can piece together the incidents, it’s a fascinating tale.

If writing for the school wall magazine qualifies, then it was way back in 1991. In 2003, I was reading my poems at Bangla Academy, but my first foray into creative writing in English was in 2011. It was a feature on the architectural heritage of the Fort area in Mumbai.

Some of them happened to me. Newspaper reports about the curious case of the suicide by an uptown couple in Goa that forms the background of ‘Blowing in the Wind’ had haunted me for five years before I could put it on paper. Another story inspired by a news item about a sporting event is ‘Six Days, Seven Lives’. I have seen people defrauded by cyberspace criminals but then the motive of such crimes is not always money and that element has been captured in ‘The Short Lives of Shazia Sultana’. I feel strongly about the lost art of letter writing that gets reflected in ‘A Man of Letters’. I must say that the real-life inspiration behind Hemant in ‘Rare’ was a rather honest man, who had called up the rightful owner of that bag full of coins at the first place on discovering the same. As I had stated earlier, I was a part of the three stories ‘They Go to Sleep’, ‘It was Time’ and ‘What’s in a Name’ right till the penultimate sequence. So, there is a common thread. All the stories, I repeat, are real-life occurrences but for their climax.

9.   Any other genre that you haven't tried yet but want to try?

Children’s literature. I guess that is the toughest challenge I can throw at myself.

‘The Hitchhiker’s Guide to the Galaxy’ by Douglas Adams; ‘To Kill a Mockingbird’; ‘Animal Farm’ to name a few and that is not even the tip of an iceberg.

11.   Other than writing, what do you enjoy doing?

Travelling; playing pranks on my daughter and of course, reading.

12.   Last but not the least, any message for your readers?

I wish to thank each one of them for picking up a book from an absolute newbie. Hope their reading experience gets better in the days ahead.
Labels: About Authors Author Interview Crime Thriller Notion Press Saugata Chakraborty Short stories They Go To Sleep