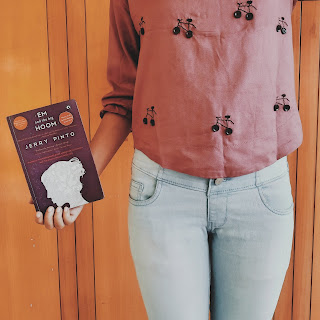 What happens when a book gives you a glimpse of harsh reality? You are absolutely wrecked. That's what I am. After reading this book.

Em and The Big Hoom is narrated by Imelda and Augustine's son (remained unnamed in the book) who tells the readers about his life and relationship with his parents and his sister, Sophia. The book focuses on Imelda, or Em, as fondly called by the son and daughter, and her bipolar disorder.

We get a peek into Em's life, her episodes of mania and depression, how her life was before she met Augustine, or the big hoom (as called by the children), her life in a small apartment in Mumbai, and her life before she became 'Em.'

Em's highs and lows, as depicted in the book made my heart wrenched. I got too much into Em and the Big Hoom's lives. Em's exploding wishes to die when she's going through her depression and her over-enthusiasm and sarcasm which is often successful in offending her son while her manic stages, will be always a stomach-tightening read for me. The son's pendulum of hope and his bearing with his mother (from his perspective) is a hard-hitting reality that goes on inside every individual's head who have and are seeing their loved ones in the arms of bipolar disorder. We also get to see how the Big Hoom has been able to wind his life around Em and vice versa and how the son loathes his father's ability to calm down Em.

The Psychology student in me was very much amazed by the accuracy with which the author has portrayed the life of someone affected with bipolar disorder. A little research told me it's the story of the author's mother.

You have to read this book because this book is a gem. It needs to be read.