Mini Book Review | Into The Water by Paula Hawkins 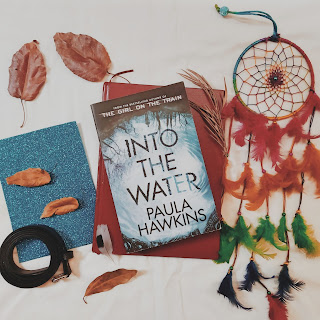 The book starts right off with a very dark and mysterious undertone. Jules (Julia) gets a news that she'll have to go back to the godforsaken village she grew up in she'd left behind because her sister Nel died under mysterious circumstances and she'd have to take over Nel's teenage daughter Lena's guardianship. As Jules goes back to Beckford, a village know for it's tough river waters, which has claimed a lot of troublesome women's lives for centuries, Jules realizes that her sister hasn't jumped voluntarily into the water. Nel Abbott had been researching about the lives taken and lives given in the water and that involved digging deep into the hushed lives of the residents of Beckford. As the story moves forwards, not only Jules' life is in stake, but so is Lena's, and a lot of people who's past were being uncovered by Nel Abbott.

The book really had a promising plot. But I was hooked only after the last 50 pages of the book started. While The Girl On The Train had just 3 first person narratives, Into The Water has 5+ narratives. At one point confusion came in my way and I had to go back pages to remember who was who. I immensely loved the suspense and the mystery that the author built around the river waters, as if it was a character of its own; but it took way to long to build up the climax. And when everything was finally getting into the place the revelation became pretty predictable to me. I so wish somehow the revelation came as a shock to me. Though I loved how the story tries to sidetrack you, I couldn't help but be in the correct revelation lane.