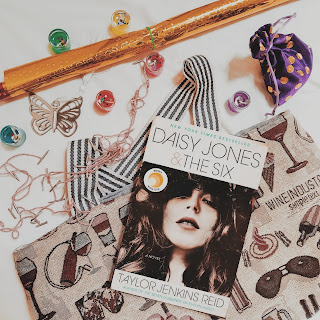 Ever read a book that has made you empathetic towards three female characters? No? Daisy Jones and the Six will definitely make you. This stunning book is based on the ups and downs of a fictional late 1960s legendary rock-n-roll band called as Daisy Jones and the Six. This story is about how the 7 member rock band was formed and how it disbanded. The book is in the form of an interview session. Each member take turn to talk about their experiences and their views about the band and it's members.

I can't talk about the book without talking about Daisy Jones. The strong force that came and went through the band. I can say that the book basically revolves around Daisy. A girl who wanted companionship, someone she could call her her own. Daisy grew up in a family of glamour, when she literally received little or no attention from her glamorous parents. She grows up to be a wild and free-spirited girl with a sad heart. Daisy's beautiful face, along with her 'cool' personality has attracted many wrong men and that had made Daisy more bold and beautiful and drug-addicted. Daisy's knack for song-writing and her alluring voice lands her up a position in the band that was previously known as 'The Six'.

This happens against the strong protest of the frontman and sole songwriter of the band, Billy Dunne. Along with Daisy's rise and fall, the book focuses on two more female characters - Camila and Karen. Camila is Billy's wife and the book shows how her faith and influence on Billy had turned him around to be a better version of himself. Karen is the keyboardist of the band and her relationship with Graham, also Billy's brother, shows her side of struggles about being a woman.

The book beautifully traverses the story of the band, the internal conflicts within the band, the power conflicts and the glamour of drugs, booze, girls, groupie that surrounded the band and it's members. This book pretty much mirrors the glitz of the American rock bands that swept away the music scenes of late 1960s and 1970s.  I could talk more about the book but that would ruin the content of the book for you who want to read this. Strongly recommended.