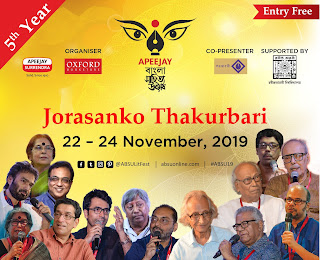 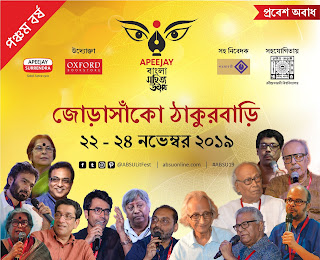 About Apeejay Bangla Sahitya Utsob
Apeejay Bangla Sahitya Utsob (ABSU), India’s first Bangla Literary Festival (ie Utsob in Bangla) created by the nearly 100 year old Oxford Bookstore in 2015, honours the rich literary tradition of the Bangla language by making it increasingly visible and accessible, building an audience for Bangla books and creating a culture of readership among the new generation. The Utsob is the pioneer of initiating an interactive platform for the voices of Contemporary Bangla Literature at the national and international stage. ABSU not only showcases all aspects of Bangla literature, literary expressions and its impact on various art forms but also aims to encourage youth and familiarize them with the Bangla language. Among eminent personalities who have graced the Utsob in the last four editions are renowned authors like Sankha Ghosh, Shirshendu Mukherjee, Sanjib Chattopadhaya, Nabaneeta Dev Sen, Samaresh Majumdar, Pracheta Gupta, Ranjan Bandhopadhyay, Saikat Mukhopadhyay, Nrisingha Prasad Bhaduri, Srijato, Binod Ghoshal, Himadrikishor Dasgupta, Anish Deb, Krishnendu Mukherjee and Subodh Sarkar; film Directors like Suman Mukhopadhyay, Aniruddha Roy Chowdhury and Arindam Sil; Bengali musicians Nachiketa, Surojit Chatterjee, Anindo Chattopadhaya and Swagatalaksmi Dasgupta; Actors Sabyasachi Chakraborty, Abir Chatterjee, Barun Chanda and Riddhi Sen. Beside these the Utsob has also attracted prominent literary personalities from Bangladesh like Salina Hussain and Imdadul Haq Milon. ABSU is committed to the journey of Bangla Literature which is both exciting and exhilarating.

Curated by Oxford Bookstores in association with Patra Bharati and Rabindra Bharati University , the fifth edition of the Apeejay Bangla Sahitya Utsob will be hosted at Jorasankho Thakurbari, Kolkata on 22nd, 23rd and 24th November, 2019. It will welcome eminent authors, renowned film directors, poets and musicians covering all the facets of Bangla literature to the City of Joy, soon to be given the name of the City of Literature.

The festival launched its almost 1- minute theme music at Oxford Bookstore on 28 June 2019. Renowned musician Surojit Chatterjee used Tabla, Sitar and Flute to compose the ABSU Theme music to encompass the essence of Bengal and its literature.
Surojit Chatterjee, renowed musician and composer launched the theme music earlier this year. He commented “I have been attending the Apeejay Bangla Sahitya Utsob for the last two years and have seen people enjoying the festival.Now I am happy to be a part of this festival with my music, in a technical capacity. The tunes were composed keeping in mind the great writers of Bengal. Instruments like Tabla, Sitar and Flute have been used in the making of the tune as the people of Bengal easily identify themselves with it. A theme song with lyrics would restrict the thinking capability of the people within the lyrics of the song; whereas a tune would allow people to think out of the box. I would like to thank Apeejay for coming up with the concept of the Bangla Sahitya Utsob. My contribution towards it is purely out of my love for literature and the festival.’’

Swagat Sengupta, Director of Apeejay Bangla Sahitya Utsob commented, “ABSU aims to bring in new elements for its audiences since inception and one of our endeavor for our milestone fifth edition is to give ABSU fans their very own ABSU theme music. Surojit Chatterjee has devoted his time composing the theme music for our Utsob because he shares the love for Bangla Language and appreciates the effort we are making to celebrate it. I am also delighted to see innumerable audiences being drawn to Oxford Bookstore Kolkata round the year as we began to focus on various facets of Bengal and its literature in between two ABSUs. Various online and offline endeavors are underway to extend the Utsob to the masses and the Theme music is a very significant initiative in the run up to ABSU 2019 in November. Apeejay Bangla Sahitya Utsob venturing into creating a signature tune speaks volumes about the response from the Utsob fans and followers. Patra Bharti and Oxford Bookstores have inaugurated ABSU inside Oxford Bookstore, moved to the much larger Apeejay House Lawns and now have the honour of hosting ABSU in the courtyard of Jorasankho Thakurbari for the second year. That the courtyard of the birth place of Nobel Laureate Gurudev Rabindranath Tagore will ring with ABSU theme music this year is a matter of great pride for us.”

Social Media and other offline Activities

Furthering the aim of reaching to many, the Festival team introduced various online and offline events and activities throughout the year. In order to take the festival to schools and colleges it has hosted several Mini- ABSU Sessions at Oxford Bookstore with schools and colleges like Pratt Memorial School, Modern High School for Girls, The Indus Valley World School , and T.H.K Jain College , to name a few. The online ‘Bangla Sahitya Quiz’ engages the readers five days a week from Monday to Friday and five winners are declared on every Saturday. ‘Jana Ojana’ a trivia segment is published thrice a week introducing the readers to unknown facts about Bengali Literature. Specially curated Bangla Adda Sessions at the Oxford Bookstore engages the readers face to face with the festival team where queries, information, feedbacks are shared and views are exchanged to help us give back to the society relevantly. A recently launched Adda invited several upcoming Facebook Pages and Groups working in various sub—fields of Literature. This opened up the Festival to a broader audience. Apart from these newer additions, several topical in-store ABSU sessions on the birth anniversaries of stalwarts like Vidyasagar, Sunil Gangopadhyay, Satyajit Ray, Rituparno Ghosh and others frequent the yearly schedule of the festival.