Mini Book Review | Bring Me Their Hearts by Sara Wolf 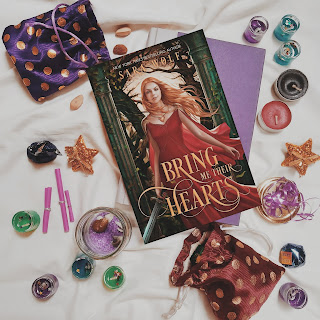 Sara Wolf's Bring Me Their Hearts is a fantasy romance series that is surely going to amaze you. In the kingdom of Cavanos, witches and humans are enemies and witches can turn mortals into immortals by taking out their hearts and storing them outside the mortal's body using magic. These feral immortals are called Heartless and they can be commanded only by their witches. One such Heartless is Zera, a 19 year old girl who had been turned immortal by her Witch Nightsinger, three years ago.

Wars have been claiming both human and witch lives since ages in Cavanos due to the differences in faith and religion. In order to stop another impending war, the witches have collectively come up with a decision to send Zera to the capital of Cavanos - Vetris, to steal the Crown Prince's heart. But Lucien, the Crown Prince, is not vulnerable to flattery and neither is Zera too eager to mend her personality to flatter the Prince. Zera is only eager to get her heart back and the only way to do so is to kidnap the Prince and take his heart to the witches.

Bring Me Their Hearts is a beautiful fantasy series where the protagonist is one heck of a strong, witty and outspoken character. I loved how the author played out the 'opposite attracts' trait in this novel. I loved the banters between Zera and Lucien; and although it's obvious that the two of them will fall for each other, I was more than happy to see how unusually they fall for each other. I also immensely loved the back story to the Kingdom of Cavanos and the previous wars. The author has intricately laid out the story of Cavanos. Enjoyed reading this book and the next book. Would recommend it to people who love reading fantasy romance series.