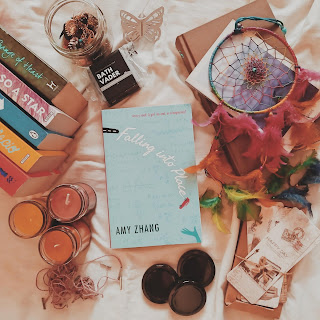 What caused popular high school girl Liz Emerson to decide that driving off the icy highway would be a good way to take her life?

Amy Zhang's Falling Into Place revolves around the life of the most popular student of Meridian High - Liz Emerson. From the outside, Liz is everything you can imagine a mean girl to be. Liz and her best friends - Julia and Kennie can put people in their places in the most meanest way possible. But on the inside, Liz is suffering - from loneliness and from the deep ache from hurting others. Liz Emerson knows she's not good, that she is a bad bad person, but to survive and cope in a mean world, you have to become someone like that.

Narrated by an unknown narrator, the author gives us glimpses of Liz Emerson's life before and after her suicide attempt. What led to her attempt and how her mother, her best friends, her fellow school pupils and Liam (a boy terribly in love with Liz) are dealing with Liz - who is fighting death in the hospital. The narrator traverses Liz's childhood and all the terrible things she has done and shows a very vulnerable side of Liz.

The book talks about a very delicate subject. Suicide in popular teens is not often talked. We often take popularity for granted. 'Why would the most popular girl in school commit suicide?' - we think. But we never think 'why is she doing it?' I don't know how well Amy Zhang has answered it but I definitely think she has given us some insight.

The book explores teen friendships and difficulties. I personally found it a beautiful yet heart aching book. The author has used Newton's laws of motions as metaphors to describe Liz's tumultuous feelings - what has been done is done, her actions have been set in motion and the mental wounds she caused in others wouldn't heal. The narrator is still a mystery and I guess that makes the book more mysterious.

Would definitely recommend this book. If you liked 13 Reasons Why, you'd like it better.