Mini Book Review | We Were Liars by E. Lockhart 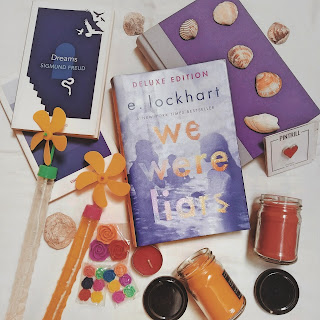 We Were Liars is such an, such an, such an amazing book. I could talk again and again about it for hours. Cadence Eastman Sinclair or Cady, visits her maternal grandfather's private island every summer where her family and her 2 maternal aunts and their children also visit. The Sinclairs are rich people and Cady's grandfather Harris Sinclair has given his 3 beautiful Sinclair daughters the most privileged upbringing. And now the Sinclair daughters want everything for themselves. For Cady and her closest cousins - Mirren and Johnny, the passive conflict between the aunts is too much to take, especially when it is threatening their relationship. The 'Liars' relationship.

Along with Johnny, his mother's Indian partner's nephew - Gat, tags along to the summer island as well. These four 'Liars' - Johnny, Mirren, Gat and Cady have developed an unbreakable bond over the years. Even when Cady falls in love with Gat, it disrupts Harris Sinclair's peace of mind because Gat is an outsider, a brown-skinned outsider - even with all his goodness, he is not a Sinclair and will never be a Sinclair because Sinclair's are blond and tall and perfect.

But will Cady ever get her first love? Her Gat? Because her fifteenth summer is a blur. Something terrible had happened that gives her migranes and amnesia. Cady tries hard to remember what had happened but her mother keeps everything away from her. And what was more devastating is that her Liars never replied to her emails, especially Gat.

So when Cady visits the island again two years later after much insistence, the sinister truth comes out. What happened during summer fifteenth?

When I tell you this book gave me goosebumps... I am NOT lying. There's this air of mystery around the Sinclair family since page 1. E. Lockhart has built this suspense that insidiously creeps out towards the end of the book and it is totally capable of devastating you to the core.

The way the author has described Cady's emotions and her feelings towards Gat, her insecurities regarding Gat, her love towards her cousins, and frustration with her diabolical family is applaudable. Here's one quote that I specifically loved:

GO READ THIS BOOK IF YOU HAVEN'T YET. A young adult thriller is hard to find and this book is a complete package. It explores teen love, family drama, mystery and covert racism. GO READ THIS BOOK!