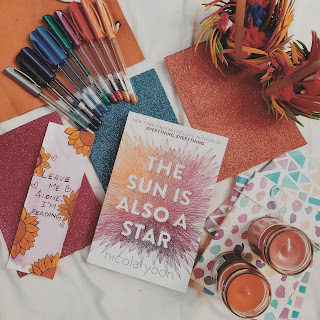 This is a book that tells you to take chances. Even if it sounds like a bad idea, take it, because you never know it might lead you to the right door.

The Sun Is Also A Star traces Natasha's day as she tries her best to stop her family's deportation to Jamaica. Natasha and her family are illegal immigrants from Jamaica but all her life Natasha has known America as her home. On the day of their deportation Natasha decides to give it a one last shot and goes to the Immigration Services office. As luck would have it, there is no way their deportation can be stopped. On hearing this news she has a breakdown and she is given the contact of a lawyer in New York. It is their that she meets Daniel - a beautiful Korean boy who is on his way to his interview for Yale.

Fate brings Natasha and Daniel together - totally polar opposites - one a science enthusiast who believes that everything should have a scientific explanation and another a hopeless romantic who believes that love needs no scientific explanation. Upon their chance meeting, Daniel sets off on his mission to make Natasha fall in love with him but Natasha can't bring herself to tell Daniel that it's futile for him to chase her.

Nicola Yoon's novel is all about love and hope and chances and coincidences. She explores both Daniel and Natasha's cultural differences - how Daniel's hardworking immigrant parents want him to become a doctor and his strained relationship with his older brother and how Natasha's father who is a struggling father is also struggling at maintaining his relationship with his daughter.

This novel is so unique from the other contemporary YA novels I've read. To expand on the topic of 'coincidence,' the author has also narrated the stories of some side characters - what led to the moment, what would have happened, what wouldn't have happened. I enjoyed this book a lot. This was my second Nicola Yoon novel and I love how her books are written in a decorative manner; like fancy trinkets and fairy lights decorated in your room to make it look prettier.