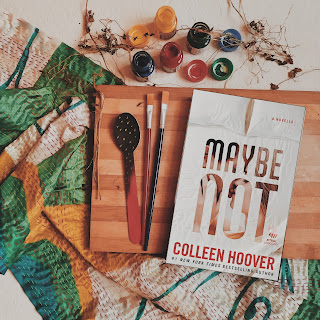 Maybe Not is the complimentary sequel to Maybe Someday in Colleen Hoover's Maybe series. This Novella focuses on two secondary characters in the first book. We get wild Bridgette and playful Warren in this book. Warren and Bridgette are two unlikely people to fall in love - one is a hot-headed girl and another is a part-time jerk and full-time horny guy. To be honest I hadn't expected this book to take a smutty turn considering the first book was a steamy romance, but it did, in a likable way.
When Bridgette comes to Warren's like and his and Ridge's apartment, Warren would want anything but a female roommate, and that too a hot one. They meet each other with a fight, then start pulling mean pranks on each other, and when things get too steamy, they start having sex. I didn't really get this part of the story, but I guess, there are some people who gets turned on by mean people in their lives, like in this book.
Bridgette turns out to be a hard case to crack, but she starts opening up to Warren about her sad past and why she acts so tough. Warren takes it upon himself to make Bridgette feel what love is.
The book is fast-paced and short (duh, because it's a Novella), it doesn't drag too much showing how the characters fall for each other. Both the characters are pretty straightforward with each other. There are times when you'll start to sympathize with Bridgette and I guess I did, but not too much. All in all, you might want to read this if you like smut or steamy romance, even if you haven't read the first book.
Labels: Adult Romance Atria Books Book review Colleen Hoover Maybe Maybe Not Romance