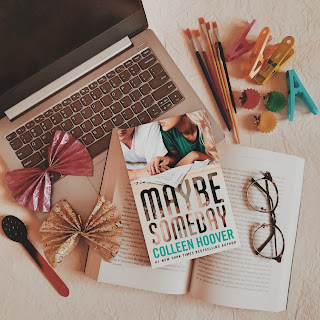 This was my very first Colleen Hoover book. I had no idea about her books, what are they usually about, what kind of themes she writes upon, so I kinda delved into this book blindly. This book took me by surprise even though it has a very simple and common romance novel plot.
Sydney loves to hear her neighbour - Ridge - play the guitar when he practices playing it in his balcony. She makes it her routine to go out in her balcony to hear him play every single night. One day he notices her singing along to the tune, and he asks her to write the lyrics of the song. Thus forms an unlikely relationship between the two. Ridge notices that Sydney's boyfriend has been cheating on her with her roommate and when Sydney comes to know about it she leaves the place. Ridge helps her by giving her a room in his apartment. Soon sparks fly between the two and both feel that they are attracted to each other but the catch is, Ridge already has a long term girlfriend and is very loyal to her and would never leave her side no matter what. A conflicted Ridge tries to steer clear from Sydney, but the heart wants what it wants.
I was conflicted between liking the book and disliking the book because the concept of cheating doesn't really sit well with me. So I tried to keep an open mind and read it. I found the book acceptable only because it has a well-defined plot and it shows perfectly how Ridge and Syndey's relationship develops, not just from physical attraction, but solely based on music. Music being one of the major themes in the books has helped a lot in the protagonists' character development and I really loved how Ridge and Syndey's characters were mature about their feelings for each other. Both of them understood why their love story would never be successful and it would always end with a 'maybe someday.'
There are other secondary characters in the book who adds to the comical side of the book and makes it an almost-funny and pleasant read. I so loved the chemistry between Ridge and his girlfriend, Maggie, it made me giddy and my heart warm. I loved how fiercely loyal Ridge is, but it also made me kinda dislike him for falling in love with Sydney. There are some interesting twists in the book which I rather not reveal. Although I found the ending a bit abrupt and fast, it was a good read.
Labels: Adult Romance Atria Books Book review Colleen Hoover Maybe Someday Romance