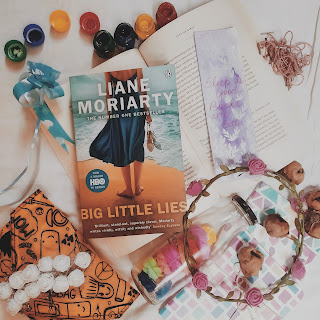 Mind = Blown
I was hooked from the last page of the first chapter itself. So there's this old woman who lives just next to Pirriwee Public School. She loves greeting all the young mothers and fathers and their little ones on the way to school. She pretty much knows what happens in the school and because she lives so close to the school. On the school trivia night, it's raining cats and dogs, and this old woman can hear men fighting and women shouting at one another. Just when she gets to realize something has terribly gone wrong in the school and is about to call the police, she can hear a blood curdling scream of a woman from the school. The police are called and soon it's known to the readers that a murder investigation has began. And scene. That's literally the end of the first chapter. How could I not just read and read with bated breath until the huge revelation.
From the next chapter, we go back 6 months ago when a young mother Jane and her kindergartener son Ziggy comes to the school for orientation day. She meets Madeline and Celeste, quite older mothers, who immediately take Jane under their wings. Friendship blossoms amongst these three women. School politics and bullying come into light and Ziggy is blamed immediately for them. As Jane struggles with the dark secret about Ziggy's birth and Madeline deals with her previously broken marriage and a teen daughter, Celeste has her own struggles that she can't tell anyone otherwise the facade of her perfect and rich family will be destroyed.
The book is somehow funny and dark at the same time. The quirkiness of the 3 female protagonists and their beautiful friendship makes the underlying theme of school bullying and domestic violence a bit lighter. This book can be triggering for some as it also deals with eating disorder, body image issues, sexual assault and a few other dark themes that could be overwhelming for some. The author spun these themes into a brilliant suspense novel and I'm totally in awe of this book. READ THIS BOOK!!
Labels: Big Little Lies Big Little Lies Book recommendations Book review Liane Moriarty Penguin Books Penguin India Penguin Random House Suspense