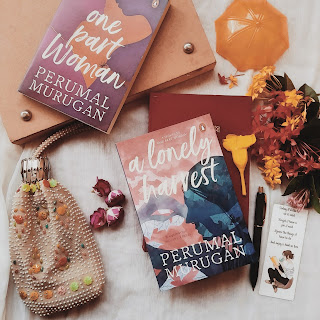 This is one of the two sequels to Perumal Murugan's One Part Woman. In this book, Murugan explores the possibilities of what would have happened to Ponna's world if Kali did commit suicide as a mean to eternally punish Ponna. The night of the chariot festival has changed everything forever and now Ponna has to live in a world where her most loved person is absent.
In this book, Murugan plays with the endless possibilities of how Ponna would have reacted to the news of Kali's death and how she would blame her mother-in-law Seerayi and her family for manipulating her; how she toils along in this lonely world and faces the injustices of being a widow; and how Ponna, even after Kali's death, thinks of him day and night.
It might rub off in a wrong way, how the characters have justified adultery in the name of God, but Murugan extracts the beliefs and the traditions of the socio-cultural setting of the book and makes it one of the most predominant theme in the book. The concept of Ardhanareeswara - that a woman is one half part of a man - the concept of belongingness.
Labels: A Lonely Harvest Book recommendations Book review literary fiction Penguin Books Penguin India Penguin Random House Perumal Murugan