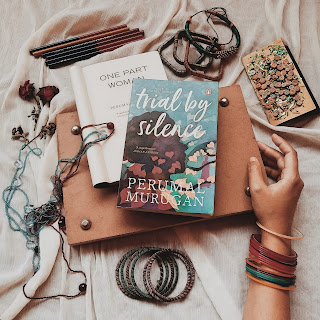 This is the other sequel of Murugan's One Part Woman. In Trial by Silence, Kali survives his suicide attempt after he finds out that Ponna had gone to the chariot festival, against his wishes. Even though Kali survives his attempt, he cannot bring himself to face Ponna. Just thinking about another man touching Ponna that way he did for 12 years fills him with disgust. Kali just cannot accept the fact that someone else cid give Ponna what he couldn't.
Ponna, meanwhile, on learning about her husband's near death experience, is filled with contempt for her family members who had lied to her. Even though Ponna believes that she deserves the silent treatment from Kali, she is equally frustrated at him for thinking that she would deliberately go to some other man.
Throughout the book, one can see the beauty behind the pain that this couple were going through. Even though their anger at each other is justified, they just can't stop thinking about each other. They still think that they belong to each other. And this is the beauty of this book. It legit made me happy even though the premise was devastating. It made me believe in Kali and Ponna's love for each other, and the way they always kept each other in their thoughts. It fills oneself with hope about love. So even if you don't read A Lonely Harvest (the sadder sequel), you should definitely read this one. It fills one with optimism.
Labels: Book recommendations Book review literary fiction Penguin India Penguin Random House Perumal Murugan Trial by Silence