Mini Book Review | The Woman in the Window by A. J. Finn 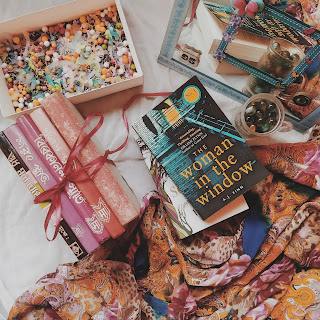 (Disclaimer: I am in no way promoting or recommending this book since just today I got to know that the author is problematic. He lied about his mental and physical health to boost the sales of his book.)
I'm a big big fan of psychological thrillers, and affter reading Gone Girl and The Girl on the Train, I do not expect anything less from acclaimed psychological thrillers. The Woman in the Window did not disappoint me at all. It blew my mind right from the start, I was sucked into the story from the very first chapter, and the end made me go 'What the f*ck?'
This book follows the story of Dr. Anna Fox, a child psychologist living in recluse because of her agoraphobia. Her life revolves around her therapy, her panic attacks, her online forum consisting of other agoraphobics, calling her husband (whom she separated with) and daughter occasionally, and keeping a watch on her neighbours through her windows. When a new family - the Russells, moves in the house across the park, Anna becomes consumed in their lives, because they remind her of what she used to have. As she becomes more involved into the lives of the Russells, she discovers something is wrong with the family. In her process to find out the secrets of the Russells, she ends up being a suspect herself. Whom does she believe? The Russells or herself?
While reading the book, a lot many people told me that the book is slow. But for me, I clocked more than 200 pages of the book in less than two days. The book might have a slow start for some. The mystery does not even start until you finish the first half, but the plot picks up the pace right after, and you won't be able to stop until you reach the last page.
This book was very relatable to me. As a psychology major, I could very much relate to the nuances of panic disorder, depression, agoraphobia and Anna's alcoholism as a way of her coping mechanism. There's a whole other thing about her coping mechanism which I won't be able to say because that would mean giving away a major spoiler. The book kept me guessing the ending, and really did surprise me with the revelation. Still, the ending could have been better. It was way too dramatic to be true.
Labels: A. J. Finn Book review HarperCollins India Suspense The Woman in the Window Thriller