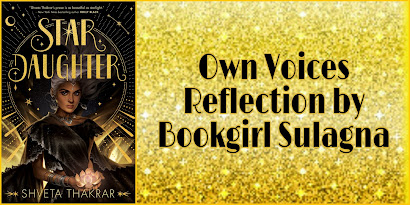 Star Daughter by Shveta Thakrar is the perfect Own Voices representation for us Hindu/Desi readers. The book starts off with Sheetal in a family party, dodging a lot of uncle and aunty's queries about her future plans and higher education and them showing off their children's qualifications and achievements. And this is the exact thing that happens to us Desi kids, no matter in which country you are living in.
Not being able to relate to many YA fantasy books had left a sour taste, but with the emergence of Desi representation in YA books, we Desi readers finally have something where we can go 'hah that's so me!'
Not only has the author incorporated the little traditions that we follow, in Star Daughter, like - touching elders' feet, calling our aunts and uncles by 'aunt' and 'uncle' instead of their names, and the little things like mentioning various languages that Sheetal's community people spoke; Shveta Thakrar has based her entire story on one of the most influential part of Hindu mythology - Stars and constellations (nakshatras). There is finally something that will be educational to non-Desi readers as well.
We Hindus have heavy beliefs on astronomy. Our astronomy is very much different from western or oriental astronomy. I loved how the author spun a tale where the stars are actually living, the different nakshatras having representative houses in the heavens, and that the stars are muses of mortals. To be honest, this 'star being the muses of mortals' aspect, has certain romanticism in our myths and ancient lores. And seeing this become a YA fantasy makes this book even romantic.
I cannot end this post without talking about the food mentioned in the book. Sheetal's family being Gujrathi (people from Gujarat - A western state in India, where most are vegetarian), the author has given attention to the vegetarian delicacies of this state. This is another thing that needs kudos because non-Desis will know that in India even the  food changes from state to state, such is the diversity in India.
Labels: Blog Tour Harper Teen Harpercollins HarperCollins India Hear Our Voices Blog Tour Own Voices Reflection Shveta Thakrar Star Daughter