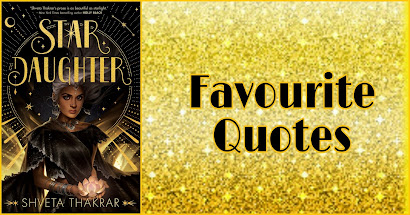 1. "I never wanted you to inspire me. I want to write songs about you, not because of you."

2. “Few mortals can resist the lure of such a potential prize: instant recognition and universal acclaim in the annals of human history, from the moment they return home until the end of time. Like a fire that never ceases to burn and shines its light over all that comes after.”

4. “I will never stop regretting having left you. Never. It was the greatest mistake of my life.”

5. “Star girl, the whole reason I wanted to start writing songs again was so I could write them for you.”

6. Saying no wasn’t enough. Grand speeches wouldn’t do it. The stars needed her to remind them humanity was worth something, but she couldn’t do that as their champion. What would that accomplish except prove what they already believed, that stars were superior?

7. Terror ate black holes in her as she tried to get away. But there was nowhere to go, and so she sang. She sang and sang, her voice tearing free and dissolving into starlight. She sang her love, her defiance. She sang for herself. It was a song no one else could hear, a song of flame, of transformation.

8. Each new memory was a note, each note a wealth of sound and light.

9. The darkness was beautiful because of her presence within it.

10. It was funny, the way things changed. How people could be shocked by something, a bit of information that didn’t fit what they knew of the world, and then expand and grow around it, into it, until it became part of them, just another piece in an overarching narrative.