Press Release | Unbound: A Tale of Love and Betrayal in Shanghai 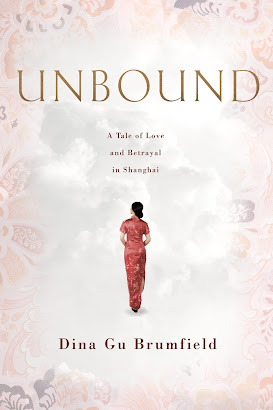 A Tale of Love and Betrayal in Shanghai

A MULTI-GENERATIONAL NOVEL IN CHINA NAVIGATING

LOVE, FREEDOM OF EXPRESSION, AND RESILENCE

"Brumfield’s debut is a complex story that highlights the struggles between classes as well as racist practices against the Chinese by imperialist foreigners in their own country.”

Women have to go to extraordinary lengths to survive and find love, a life for themselves, and to create opportunities for their own self-expression. Unbound is about survival and what women sacrifice and endure to pursue love and a future of their own making.

When author Dina Gu Brumfield first came to the Unites States in the late ‘80s from China, she left a restrictive communist culture, in which people—especially children—were fed a communist ideology that enabled one party to exercise power over.  It is also a culture deeply rooted in submissive and traditional expectations. She re-educated (a word used by communist in China back then) herself to see things from very different perspectives.

Using her newfound understanding and knowledge, Dina Gu Brumfield pens her debut novel, Unbound: A Tale of Love and Betrayal in Shanghai [Greenleaf Book Group, August 2020]. A sweeping, multigenerational story of two iron-willed women—a grandmother and granddaughter—set in a richly textured, turbulent portrait of the city of Shanghai in the twentieth century, where everyone must fight to carve out a place for themselves amid political upheaval and the turmoil of war.

Mini Pao lives with her sister and parents in a pre-war Shanghai divided among foreign occupiers and Chinese citizens, a city known as the Paris of the East with its contrast of vibrant night life and repressive social mores. Already considered an old maid at twenty-three, Mini boldly rejects the path set out for her as she struggles to provide for her family and reckons with her desire for romance and autonomy. Mini’s story of love, betrayal, and determination unfolds in the Western-style cafes, open-air markets, and jazz-soaked nightclubs of Shanghai—the same city where, decades later, her granddaughter Ting embarks on her own journey toward independence.

Ting Lee has grown up behind an iron curtain in a time of scarcity, humility, and forced-sameness in accordance with the structures of Chairman Mao’s cultural revolution. As a result, Ting’s imagination burns with curiosity about fashion, America, and most of all, her long-lost grandmother Mini’s glamorous past and mysterious present. Driven by her growing thirst for knowledge about the world beyond 1970s Shanghai, Ting uncovers her family’s tragic past and face the difficult truth of what the future holds for her if she remains in China.

“Freedom is a word we too easily throw around. It’s an abstraction usually tied to such things as the right to vote and the right to say what you want without risk of being thrown in jail,” Brumfield says. “But if you’ve lived in an autocratic society, you realize it is so much more than that. Unbound gets at the human dimension of freedom. As with Mini, Ting and the other characters, we all yearn for self-expression, and the freedom to choose how we live and love.”

Through the pages of Unbound, Brumfield explores resilience and personal determination in the face of tragedy and heartbreak.

This captivating read features strong independent women who risk everything to break free from their visible and invisible bounds in an effort to seek a life that is true to themselves. Unbound also touches on:

·       #OwnVoices storytelling loosely based on author’s life and experiences being born and raised in Shanghai, China

·       Bringing to life the stark difference between 1930s and 1980s Shanghai, and how circumstances and societal expectations impacted the choices available to a young woman in those times

·       Using fiction to explore, through the characters’ eyes, the search for personal self-expression in China during turbulent times of cultural conflict, war, and communist rule

·       The human dimension of what freedom truly means

“I lived through what Ting, the main character in Unbound, experiences,” shares Brumfield.  “It’s a uniquely intimate account of what young women faced in Shanghai during quarrelsome times..”

Dina Gu Brumfield was born and raised in Shanghai, China. She came to the United States to join her family as a young adult in late ‘80s. After earning her MBA, she worked as a consultant in New York and at various Silicon Valley companies. It took her 10 years to write and publish Unbound, as English is her second language – a true accomplishment and feat.

Unbound: A Tale of Love and Betrayal in Shanghai will be available on Amazon and through all major booksellers on August 4, 2020. For more information, visit DinaBrumfield.com.