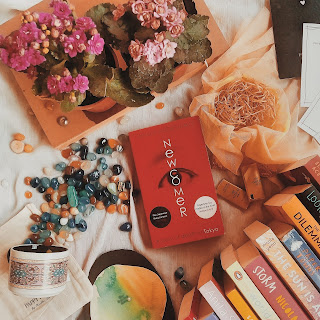 After finishing every Keigo Higashino I can't help but wonderI how different it was from the last book. In Newcomer, we get to see detective Kaga in action again. This time however, the mystery is not surrounding the who, why, when of the murder or even the murder itself. The mystery is in each and every event surrounding the murder.
A woman has been murdered in her flat in the financial district of Nihonbanshi in Tokyo. The woman is a newcomer and there may be no motive to kill the harmless woman. Detective Kaga is a newcomer as well. As Kaga goes around sleuthing in the nearby shops, he gets to know that everyone has some connection with the murdered woman.
It's no secret that I love Keigo Higashino's books. And Newcomer is unlike the others. You won't get to read anything related to the murder until you read the last four chapters. But as Kaga goes around questioning people with whom the victim had any means of contact within the 24 hours before her death, Kaga goes around solving little mysteries that apparently has no connection with the main murder.
When you read the book you'll get to know why. And it warmed my heart when Kaga says that doing detective work is not just about catching the killer, it's more about why it happened in the first place so that similar incidents don't happen again. He is like a fairy godfather, sprinkling his golden detective powder and solving seemingly minute problems which when mended can even mend broken relationships. And I give my utmost thanks to Keigo Higashino for writing an effing murder mystery that gives you hope and happiness. AND THIS... LADIES AND GENTLEMES IS WHY YOU SHOULD READ A KEIGO HIGASHINO BOOK!!