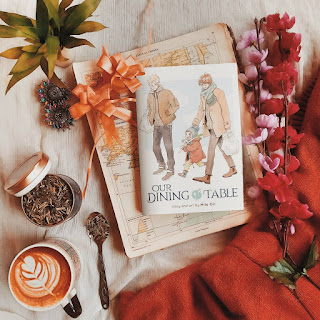 Yutaka is a simple salaryman who prefers eating alone. In spite of his co-worker's ridicules, he goes out to the nearby park and eats alone. In one such lonely afternoon, as he's about to take a bite into his rice cake, a small kid comes and takes a bite instead. Just after the bite, the kid's older brother arrives and profusely apologizes to Yutaka.

The small kid Tane loves the rice cake so much that he asks a surprised Yutaka to teach his brother Minoru the recipe. Minoru then requests the dumbfounded Yutaka to accept the offer since he can't cook good food and Tane refuses to eat at home. Even though Yutaka feels uncomfortable eating with people, he is unable to refuse the two brothers.

Soon Yutaka becomes a regular at the brothers' household and Minoru and he share their lives, stories about their insecurities together. Yutaka discloses why he fears eating with people and he realizes that he actually looks forward to these homely sessions. He also realizes that he has developed feelings for Minoru.

Our Dining Table is a short, simple, and heartwarming manga. I loved everything about it - the graphics, Yutaka and Minoru's characterizations, a super squishy Tane, the heart-fluttery moments between the two men, how they fall in love with e/o, and the happy ending. It's very rare to find mlm or wlw books where the story is not based solely on the LGBTQ characters fighting against prejudice. Our Dining Table shows a brighter, hopeful side of two gay men falling in love. Our Dining table is meant to be enjoyed to our hearts content.